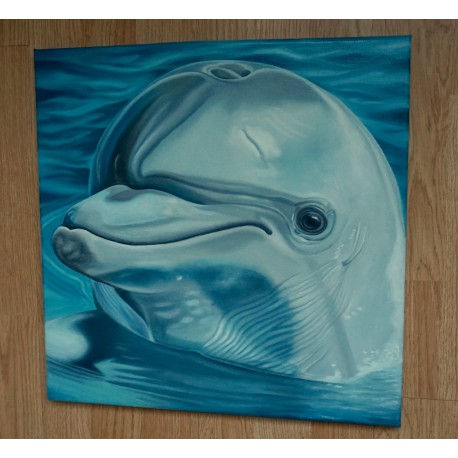 FOR SENDING SHIPMENTS TO OTHER COUNTRIES PLEASE CONTACT US AT THE E-MAIL ADDRESS:info@pharmawise.cz

By buying this product you can collect up to 60 loyalty points. Your cart will total 60 points that can be converted into a voucher of 480 Kč.

DOLPHIN .. Atlantis ... guide ..symbol of duality
Dolphins evoke a feeling of playfulness, are known for their sense of the game. They symbolize joy and freedom.

Dolphins are well known for their intelligence.
In many ancient cultures were considered the king of aquatic realms. The symbolic significance of the dolphin is closely connected with the royal properties. Not as dominant ruler, but as a wise, friendly monarch.
Greek term for dolphin is delphis and is derived from the word DELPHYS meaning womb.itself no longer symbolizes the lunar and feminine attributes.
It is characteristic playfulness, perfection, gentleness, harmony, intelligence, happiness, friendship, fellowship, resurrection, generosity, too

Christian symbolism expresses the dolphin as an aspect of Christ in Christian art as a symbol of resurrection. Their protecting, stabilizing, compassionate demeanor is a "message" for peace and for the cleansing of the heart.
Some artistic renderings represent dolphins carrying worshipers leaving his physical body to Christ.

In ancient Greece, the dolphin tours blessed souls of the dead on the islands. In a symbolic sense of transition, transformation and rise to a new level of being.
For his intelligence was a companion of the god Apollo (the Sun) and the goddess Aphrodite (Moon). According to legend, Apollo turned into dolphin and arrived at the temple at Delphi, where a shrine was the earth goddess Gaia, guarding her dragon god Python. Apollo Python overcame, and became a patron of the shrine.
Sun symbolism is a higher idea, and enlightened life. As a companion of Apollo also has a dolphin royal properties: strength, power and authority.

Dolphin is associated with the themes of duality: fish and mammals, water and air.

The symbolism of duality speaks to us about "being in two worlds at once." Nipple like yin and yang.

Celtic symbolism is revered as a highly honorable creature, and as the protector of the holy and sacred water wells. She is the guardian and observer of everything related to water.

Legends say that in the hearts of dolphins living spirit of mermaids.

No customer comments for the moment.

30 other products in the same category: